(Olympia) – Several key pieces of housing legislation have been signed into law by Washington Governor Jay Inslee. Among the biggest changes, (HB1923)  offers a variety of tax and planning incentives for towns to adopt a variety of growth policies that allow for additional density in a responsible way. Washington REALTORS® is planning a series of statewide training sessions to ensure cities know the full details of what’s available.

This year’s session may be best remembered for what DIDN’T pass, rather than what did. The session began with housing among the top priorities for lawmakers thanks in part to the “Unlock the Door to Affordable Housing” campaign. With the support of our members, our coalition partners and the most influential PAC in the state, REALTORS® took the first steps toward increasing housing supply and making housing more affordable in every price range.

Among the big wins hailed by Washington REALTORS®; an exemption from a 20% B&O tax increase, killing an effort to undermine “in-house” transactions and passing a number of housing measures including condo liability reform. A Capital Gains Tax proposal was also defeated, as well as proposals on dual agency and declaring REALTORS® to be independent contractors, which both failed to gain any traction.

The budget did include a new graduated Real Estate Excise Tax rate that goes into effect next January. 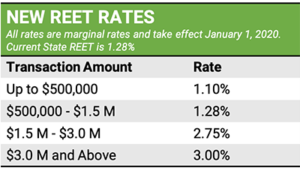 Condo Liability Reform – (SHB5334) The Condo Liability bill has now been signed by the Governor. Thanks to great work from our Washington REALTORS® Condominium Work Group and some passionate members across the state, Washington REALTORS® was able to help pass condominium liability reform that continues to protect the consumer but adds a fairer standard that should encourage developers to start building condominiums again.

GMA Minimum Density – Increasing Residential Building Capacity (HB1923)  offers tax incentives to encourage residential and mixed-use development in urban infill areas. Signed by the Governor, this law now offers incentives to cities in 10 separate areas that includes grant money for planning and exemptions from SEPA rules. The cost of these grants would be covered by an additional $2.50 mandatory document reporting fee. This law also encourages cities to adopt growth policies that allow for additional density in a responsible way, including Accessory Dwelling Units, allowing duplexes and triplexes in single family zoning and cluster zoning or lot size averaging allowances.

Residential Tenant Protections – An update to the residential landlord tenant act, (SSB 5600).  This measure increases the “notice to vacate” provision from 3 days to 14. Also, (HB 1440) has been signed into law, that requires landlords to give tenants 60 days’ written notice before they increase rent in most cases. Additionally, (HB 1462) a measure that would require landlords to give tenants 120 days’ written notice if they plan to demolish, relocate, or change the premises they’re renting has been approved by the Governor. These measures go into effect  July 28, 2019.

Seller disclosure – Two changes to the Seller’s Disclosure Statement are set to be made into law. The Working Forests notice (HB1011) that would be included with the right to farm disclosure goes into effect July 28, 2019. A smoke detector provision (SSB5284) has also passed and is awaiting the governor’s signature.

Tiny Homes – A measure (SSB5383) that allows for “Tiny Homes” has also passed and has been signed b the Governor.